It was cancer. I made the right choice! :)

Posted on February 21, 2012 by emmasrandomthoughts

I just got back from the endocrine surgeon post-op follow up.   She is very, very glad I made the decision to have the total thyroidectomy, and so am I.  I would have needed more surgery, and now I don’t!

The nodule did contain papillary thyroid carcinoma.  Now what does this mean?  Well, not much.  Basically, papillary thyroid cancer is, to quote my surgeon, a “happy cancer,” ie it’s a cancer that rarely kills.  The cancer looked totally normal, as far as cancer was concerned, and the tests of the surrounding tissue was normal, including the lymph nodes.  The cancer was in its beginning stages, and as she said, papillary thyroird cancer, in its early stages, is almost never fatal.  The endocrine surgeon upped my dosage for my thyroid replacement therapy, since she says, “That keeps your neck calm.”  Basically it helps reduce the risk of cancer recurrance.

I’m sure the question everyone is asking is, “What’s next?”  Well, we’re not sure.  Here’s why.  As I said, the way to treat thyroid cancer is to take out the thryoid gland.  They did that.  I no longer have cancer.  Radioactive iodine treatment will not increase my life expectency, because my life expectency is normal.  However, the radioactive iodine treatment can reduce the risk of recurrance.  Thyroid cancer can recur later in life, and when it does, it usually appears in the lymph nodes.

Now here’s where it gets dicey.  The recommendation (who comes up with these recommendations?  I don’t know.) is for radioactive iodine treatment in the case where a throid cancer nodule is greater than 1 cm.  Mine was 1.3 cm.  In other words, it’s close enough to the boarder that I could go either way.  My surgeon, who was very enthusiastic for a total thyroidectomy, seemed far less enthusiastic for radioactive iodine treatment.  “If it was 2cm or 3cm, I’d say definitely.  But this, I’m good with either way.”  She asked that I talk to my endocrinologist within the next couple of months to see what he recommends.  (I’m seeing him on March 14th.)

As my surgeon seemed to suggest, he may simply decide it’s not worth the side effects and the risks of the treatment.  She doesn’t seem to be convinced that it is.  I remember how she was when I went in for the presurgical consulation, when she really wanted me to have a totaly thyroidectomy.  She never bullied me or anything, but she made it very clear that she thought it was the best choice, and that if I chose otherwise, it would be against her advice.  As she went into the operating room, and confirmed that I was having a total thyroidectomy, she said, “I think that’s the best possible choice.”  And she meant it, I could tell.  She seemed less convinced that radioactive iodine would be the best choice, much more on the fence.

Until then, I read and wait.  But I don’t have cancer anymore.  I want to reiterate that.  I no longer have cancer.  The radioactive iodine treatment would be to prevent me from getting cancer again in the future, not to kill any remaining cancer cells in my body.  There are none.

Now, as promised, this post will contain a picture of my thyroid.

Warning: Picture of Thyroid Below 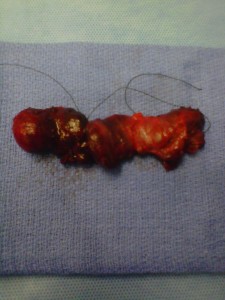 My surgeon was unhappy with the picture, because the nurse laid it flat.  It’s supposed to be V shaped.  I don’t care.  Remember it’s mirror image, so the left side is the right side, where the cancerous nodule is.  This picture was taken with a cell phone.  That’s the great thing about cell phones in this day and age.

I’m also cleared to return to work tomorrow.  The bad thing is now I’ll have to be nice to customers again.  😦  The great thing about cancer is sometimes, you really don’t care about other peoples small tantrums.  I’m working as a bank teller right now, (while I finish my teaching license) and occasionally people want tellers to do things that are against the rules.  Not just bank rules, federal laws.  Before, I used to be afraid of telling people that I could not do something, because I was afraid that they would get mad.  That’s faded over time, and ever since the diagnosis, I’ve noticed that I have no pity for customers who asked me to do things that I’m not allowed to do.

For example, another teller had a customer who wanted to deposit a check made out to her and someone else into an account that only had her name on it.  The teller told her she could not do that, and she threw a fit.  When she came back to get me (I was on lunch break) and told me about it, I thought to myself (seriously!) “I’m gonna enjoy this.”  Now, I didn’t yell at her or anything, but I didn’t feel bad at all telling her that she couldn’t do that, it was against the law.  A part of me was thinking, “Yeah, you can’t put the check in your account, I have cancer.  I win!  And now you’re miserable too, which makes me feel even better.”  (Never forget the words of the wise woman who prayed, “Dear Lord, if you won’t make me thin, at least make my friends look fat!”)

So, now I’ll be going back to work.  I’m going to try to be more polite to customers, but I am going to keep part of the “cancer attitude” I had.  If a customer wants me to do something I cannot do, or is illegal, they can pitch a fit, bitch, moan, cry all they want.  It doesn’t bother me.  If they have a problem with the federal laws, they can call their Congressman.  Don’t get me wrong, I never used to give in to the customer, but I used to be afraid of their anger, of them being unhappy with me.  Now, I don’t care if they are unhappy that I won’t break the law.  🙂

As I mentioned before, I am feeling so much better that I am once again dancing to music in my room.  Here’s a video that approximates what that looks like.

12 Responses to It was cancer. I made the right choice! :)