Posted on May 19, 2012 by emmasrandomthoughts

At the end of The Dark Knight, The Joker tells Batman, “So this is what happens when an unstoppable force meets an unmovable object.”  I thought about that quote during the Oz final between Nole and Rafa, especially at the end, when I thought they would both collapse.  Which one is the force and which one is the object?  I leave that up to you.

I realize that, with The Dark Knight Rises coming out soon, my comparison with the Dark Knight is a little dated.  But I don’t care.  First of all, Nole is often called “The Djoker” because of his prankster nature.  Second of all, Nole last year suddenly transformed himself from Jack Nicholson’s Joker to Heath Ledger’s Joker; he stopped being funny and simply became terrifying.  Lastly, I can’t compare Nole to Bane.  Bane is simply gigantic, due to steroid like drugs.  Nole is thin and rubbery.  If anything, he has Catwoman’s physique, but I can’t compare Nole to Catwoman.  That’s just wrong on so many levels.

The Joker tells Batman, “You and I are destined to do this forever.”  I think he’s right. 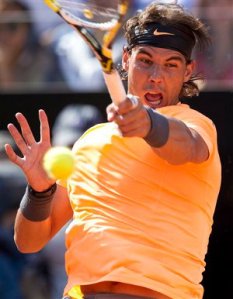 This entry was posted in Uncategorized and tagged Nole, Rafa, Rome, tennis. Bookmark the permalink.