Posted on October 27, 2012 by emmasrandomthoughts 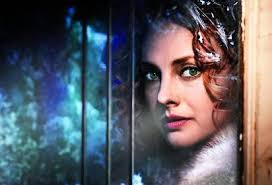 Last year, in a class, as an ice breaker exercise, all of us had to go around the room and say the last book we read.  I said, “The Winter’s Tale.”  Most of the students hadn’t heard of it, but I explained that it’s one of the last plays that Shakespeare ever wrote.  As such, the language is incredibly complicated, even by Shakespeare standards, and does not make a good introductory play.  The play is also classified as a romance, because it is neither a comedy nor a tragedy, but contains many elements of both, as well as elements of fairy tale.  It is also famous for the greatest line of stage direction in all of Shakespeare, perhaps all of theater, “exit, pursued by a bear.”

One thing that is difficult to explain is how moving this play truly is.  I didn’t appreciate it the first time I read the play.  The first time I read the play I remember thinking, “What is wrong with Leontes?”  “Is that REALLY Hermione?” and so forth.  Yet the second time reading, I was impressed by the themes in the play, and how the more fantastic elements of the play allowed Shakespeare to explore those themes.

Anyway, Great Lakes production of The Winter’s Tale was very striking.  The color palate for Silicia’s kingdom, with its strong shades of blue, was gorgeous to look at, and contrasted quite well with the open, warm landscape of Bohemia.  I was also impressed by the set design, which was so versatile, and provided a lot of movement for the action. 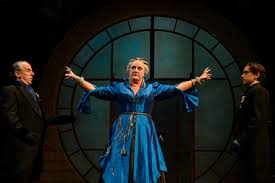 I was also pleased with the performances.  Leontes had the appropriate amount of hubris and paranoia, and his transformation for the loving husband and good friend into the jealous arrogant man was well played. (And indeed, what struck me in this production was how Leontes wasn’t simply paranoid, but proud.  He defies the god Apollo’s revelation through the oracle, thus sealing his fate, much as Creon in Antigone.)  He also portrays the king well in the latter half of the play.  Leontes has been essentially been living a penitential life after the loss of his wife and children, metaphorically sitting in sackcloth and ashes.

Paulina, my favorite character in the play, was also delightful.  Stern, assertive, and yet benevolent, she does not allow herself to be intimidated by anyone.  I was also delighted by the performances of Florizel and Perdita, the young lovers.  Normally, in past Great Lakes productions, the “funny” parts of the comedy can be played too broadly, and can often simply seem goofy.  The young lovers are played with a great deal of respect, as they should be, because their union brings about redemption and healing, not just for their parents, but for families and for the nations.  Indeed, the predominant theme of The Winter’s Tale is restoration, is reclaiming what had been lost, joining together what had previously been torn asunder.

There was one aspect of the show that I did find strange, and two aspects of the show that I did not like.  First of all, the character of Time was played by a young boy, instead of an old man.  Specifically, time is played by the same boy who playe Mamillius, the king’s son.  This was strange, and I was not sure what to make of that.  I still am not.
I was also disappointed with the design of the bear, which seemed less like a bear and more like a dog.

However, I was most disappointed in the portrayal of the Oracle’s message.  I understand that the designers of the play were trying to give a sense of the holiness of the oracle, and that sense of fear and trembling that would have associated the divine; not simply in the world of the play, but in the world the ancient Greeks and in Shakespeare’s own world.  In order to do this, the designer makes reference to Raiders of the Lost Ark, and place the Oracle’s message in a box resembling the Ark of the Covenant.  Two people even carry the box on their shoulders via poles, and there are other moments in the production that directly call to mind the the movie.  Specifically, there is an image of Leontes holding dust that (for some reason) is present in the box of the Oracle, much as the Nazi does in Raiders of the Lost Ark.

Now, the aim of the director and designer was to give the audience the sense of reverence, of holy fear, that would have accompanied the message of the Oracle, a message from the god Apollo himself, so that Leontes rebellion against Apollo would seem even more shocking, terrifying, and his punishment even more just.  At that moment, he crosses the line from simple paranoia and jealousy into hubris, defiance against the divine decree.  However, this choice had almost the opposite effect on my friend and I.  Upon seeing the Ark, my friend and I had to fight the urge to laugh.  When the box was opened, I wanted to shout out, “Cover your eyes!”

Far better was the final scene, when Hermione is brought back from her place of hiding.  The scene is somewhat dangerous in a way, because there is a danger of confusion or disbelief on the part of the audience.  However, the production effectively avoids both of these traps, and the audience is instead invited to rejoice in Hermione’s restoration to her husband and daughter, Leontes’ admission of sin and request for pardon, and at the upcoming marriage of Florizel and Perdita.  It reminded me of the line in Amadeus, when Salieri describes the ending of The Marriage of Figaro, when he says, “I heard the music of true forgivenss, conferring upon all who heard it perfect absolution.”