Posted on May 24, 2013 by emmasrandomthoughts

Last week I was delighted to discover that there is a compilation of St. Crispin’s Day speeches on Youtube!  (Youtube, how do I love thee, let me count the ways…)

Anyway, I wanted to share my thoughts on the various different versions of the speech.

First up is the legendary Sir Lawrence Olivier.  It’s worth noting that this version was filmed in 1944, which means that we must consider Sir Lawrence’s interpretation in light of other famous speeches, such as this one.

One commentator said that his father saw this film during the war, and said it was positively electric.  I believe it.  As one person pointed out, this version would have been thrilling in the theater.  Olivier had a wonderful voice and hearing it in the theater must have been like encountering a force of nature.

There is no room for doubt or sentimentalism in Sir Lawrence Olivier’s speech, indeed, the moment forbade it.  Sir Lawrence Olivier’s speech is not so much about the battle of Agincourt, but rather about the coming invasion of Hitler’s Europe.  The British had been fighting Hitler for five years by this point, and the population of London had suffered terribly during the Blitz, enduring night after night of bombing.  By making this film, Olivier was saying to the British troops, weary from years of fighting “Once more unto the breach dear friends, once more!”

Without that part of the line, there is no play on words when Henry says “and gentlemen in England now abed shall think themselves accursed they were not here.”  It is a jab at the “gentlemen” at home, and declaring that the bond of soldiers will raise these men in Henry’s esteem, and the gentlemen (the nobles) shall diminish in Henry’s esteem.  It is a brilliant slight of hand and turn of phrase, and Olivier’s speech is lessened, in my opinion, for its absence.

The second performance, by David Giles, could not be more different than the first.  The second one is intimate, even vulnerable.  It’s an incredibly unique and original choice, and strangely appropriate.  This production, on a BBC sound stage, simply does not have the appropriate crowd to give a roaring speech at full volume.  It would look silly. In a way, this version of the speech actually highlights the moving, almost sentimental nature of the speech.  Henry talks about how in years and even decades to come the men will remember the various different soldiers present that day.  This part is entirely true, as anyone who has ever seen old comrades in arms has seen.  There is an unshakeable bond between these men.  Interestingly, he also performs the whole speech, not omitting the part about coveting honor, that Olivier and Branagh.

Of course, at the same time, it lacks the majesty and bravado that the St. Crispin’s speech demands.  So, while I respect the actor for making an original choice, I don’t like the choice.  I am far more impressed by the beginning of the speech, which is the only speech I’ve heard that actually sounded spontaneous.  Sir Lawrence’s speech sounds rehearsed, as though Henry spent the night before the battle writing it.  David makes the speech sound as though it is coming to him at that very moment, and that is important.

The third performance is the only one that actually seems to take place in a theater.  I’m surprised in a way that there was even footage of it, although videotaping a live performance is not forbidden; I was fortunate enough to see a videotape of Sir Derek Jacobi’s King Lear taped live.  Even so, it’s strange to see it end up on Youtube.

Michael Pennington also performs the entire speech, and also to a small band of his inner circle, rather than to his entire army.  I think he does a wonderful job of balancing the two extremes of David Giles and Sir Lawrence Olivier.  His tone is not completely conversational, and yet he lacks the “this is the big speech” tone of Olivier.  I also love the fact that the actor is clearly visualizing their future, when they, as old men are feasting their neighbors and showing their scars, and when he says the line “these wounds I had on Crispin’s day” his body language and tone even sound, just a shade, like an old man.

Balance marks the end of his speech as well.  He balances the naked bravado and the sweet affection of the speech quite well, so that it sounds grand without being rediculous, and affectionate without being weak.  I also love that he hits the word “gentle” in the speech.  The word that Olivier left out, he accents!  However, I think he missed an opportunity in this version, by hitting the word “accursed” rather than the word “gentlemen.”  I think that the audience, unless they have read the speech numerous times, probably need the actor’s help to get the veiled insult to the gentlemen in England now abed. 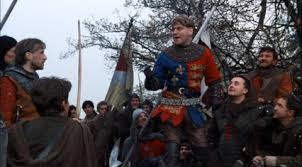 The first thing I have to point out about Kenneth Branagh’s speech is that he cheats.  While none of the other performers had music, Branagh has a score of strings whizzing in the background, triggering the emotions and guiding the viewer’s responses.  This makes it more difficult to compare the speeches on merits of the performances alone, and I wish I could delete the music!  (I must point out I do not fault Branagh for this decision.  It was the right one.)

The second thing I want to point out is that, while Branagh’s speech is most similar to Sir Lawrence Olivier’s, Branagh more successfully uses a knowledge of film and movie styles of acting.  While he spends most of the speech addressing the vast troops, and therefore needs to shout, his volume varies.  When he comes to the lines “we few, we happy few, we band of brothers,” he drops his voice down and speaks to his men in a much more personal, intimate way.  He does the same thing when he addresses the men by name.  It is not a laundry list of names, he is actually speaking to these men.  He understands the sweetness, if that’s the right word, of this moment.  In addition, he also understands that film is a different medium than the theater.

His speech also sounds a little more natural than Sir Lawrence Olivier.  It’s only a little more natural, but he has a wryness in his voice, especially at the beginning.  He also speaks more slowly than Sir Lawrence, which adds to the sense that the speech is coming to Henry at that moment.  At the same time, it also makes him seem more thoughtful, especially when he gives instructions to excuse men who do not want to fight.  His Henry has bravado, but it’s a thoughtful, tender bravado, more suited to film than Olivier’s, and more suited to an audience that is unfamiliar with Shakespeare.

So, which one is the best?  In a way, at this moment, I like Michael Pennington’s performance the best, which is not to say that is the definitive performance of the speech.  Not by a long shot.  I once heard that great music is better than all of its possible interpretations.  I know what they mean, since it is possible to hear many different performances of Handel’s Messiah, and yet Handel’s Messiah is better than any one person’s interpretation.  It is that fact that draws us back to it, to perform it again and again. In addition, the way we perform music, and think about music, changes over time, both within the course of our lives as well as throughout human history.  The way we perform music or respond to art says just as much about us as it does about the art.

In the same way, the St. Crispin’s speech is greater than any one person’s interpretation.  No actor, no matter how talented, can completely do justice to it, and yet, it is that fact that makes the actor’s performance all the more compelling, and all the more worthwhile.

This entry was posted in Uncategorized and tagged Shakespeare, theater, Youtube. Bookmark the permalink.