Posted on June 22, 2013 by emmasrandomthoughts

In other words, this is a time capsule.

1 First of all, this production makes a great use of the sense of surveillance in Elsinore.  The film actually uses security cameras in its filming.  The Friday I watched this production, I bought the USA Today, and on the front page was all about the NSA and surveillance scandal within the United States.  It brought a strange sense of immediacy to the production.  How much is US security like Elsinore?  When we see our friends from college, do we wonder in the back of our minds, “Were you not sent for?”  When we meet our boyfriends and girlfriends, do we ask ourselves, “Where is your father?”  In other words, does USA=Denmark=Prison?  Every American will have a different answer to that question, but it’s worth asking periodically.

2 The performance that really stands out to me in this production is Patrick Stewart’s performance as Claudius.  He was simply riveting, and his soliloquy “O my offense is rank” was full of pathos. 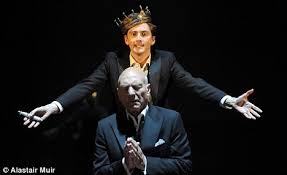 David Tennant as Hamlet and Patrick Stewart as Claudius

3 That being said, the moment when he shook his head at Hamlet after The Mousetrap was wrong.  He was shaking his head as a father unhappy with his son for spilling a drink, not “Oh Hamlet, you know that I killed your father, and now I’ll have to kill you.”

4 David Tennant’s performance did have a little bit of the Doctor in it, especially in his happy moments of madness.  This is not to say that any of it was inappropriate in any way.

5 That being said, I was impressed with his performance and his interpretation of the character.  Hamlet, needless to say, requires an incredible emotional range as well as the ability to think out loud.  He could do both very well. 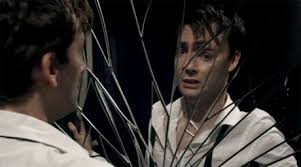 6 I had mixed feelings about Ophelia’s performance, especially during the nunnery scene.  At times, I felt she was indicating.

7 The production altered the order of the play, which seems almost sacrilege.  The moved Act 3 Scene 1 to just before Act 2 Scene 2. 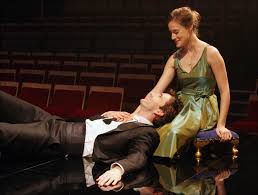 David Tennant as Hamlet and Mariah Gale as Ophelia

8 Once I got over it, I have to admit, their jumbling of the play did make good narrative sense.  It makes far more sense to place the To Be or Not To Be to just after Hamlet’s confrontation with the ghost.

9 The ghost of Hamlet’s father was also played by Patrick Stewart.  I have never seen this before, but it made a lot of sense, although it does backfire a bit when Hamlet confronts his mother.

10 David Tennant is certain that Hamlet’s line, “The rest is silence” means that Hamlet discovers that their is no afterlife, only oblivion. He confirmed this in an interview, and it certainly comes through in his performance.  Good for him.  I understood what he meant when I saw it.

12 Plus, if the ghost is just a hallucination, then Hamlet’s madness is far more real than we previously understood.  That means that Hamlet is ultimately a victim of his own madness.  I don’t like to think of Hamlet as a victim.  I had a professor who said “No one in Shakespeare is dying of cancer!”  What he meant was, the characters earn our respect (or our hatred) by their actions.  If Hamlet is truly mad, then he is no longer in complete control of his own destiny.  I don’t like that.  I’ll write more about the veracity of the ghost in another post.

13 I loved the moment when Hamlet forces Claudius to drink the poison.  The rage of Hamlet, the shrug of Claudius, it was perfect. 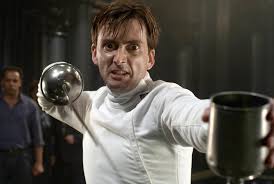 14 Lastly, this production decided to leave out Young Fortinbras at the end of the play.  This is a BIG mistake.  I’ll write more about that in the future.

All in all, a very fine production of Hamlet.

Here is a taste: David Tennant performing my favorite soliloquy from the play

Note to the audience: Hamlet just before this moment, has ripped off a surveillance camera off the wall.  He throws it on the ground and says, “Now I am alone.”