Gettysburg: 150 Years later (and not Fortinbras)

Posted on July 6, 2013 by emmasrandomthoughts

July 1st through 3rd marked the 150th anniversary of the end of the battle of Gettysburg.

First of all, cheater!  There is a woman at the end of this video who is cheating!  She should be ashamed of herself.

Second of all, I think the best remark about the Civil War I’ve ever heard was from Ken Burn’s Civil War.  One of the historians, remarked about the opening scene in Patton, in which he boldly proclaims that the United States had never lost a war.  He said, “Only a Northerner could speak that way.”  Southerners lived with the reality of defeat, and with the famine and destitution that results. 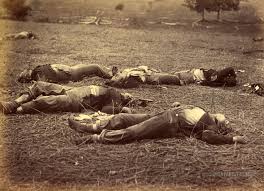 Lastly, since this is the summer of Hamlet, I want to relate this post to Hamlet.  I’m going to be lazy and point out that the Civil War is unrelated to Young Fortinbras’ campaign in Hamlet.  First of all, one of the soldiers tells Hamlet that the land they were fighting for was worthless.  The Southeast United States is certainly not worthless, today or then.

Second of all, Hamlet says that the men are fighting only for the illusion of glory in death.  The hope of a glorious death was certainly a motivating factor in the Civil War (as it is in every war) but it was not the primary factor, especially in the south.  The wars were fought on their land, and that always provides an extra motivation.

Indeed, Young Fortinbras’ campaign seems far more related to Vietnam than it is to the Civil War.

I could write more, but I don’t really have the time right now, and this post is late enough as it is.

This entry was posted in Uncategorized and tagged Civil War, Gettysburg, sesquicentenial, Summer of Hamlet. Bookmark the permalink.

2 Responses to Gettysburg: 150 Years later (and not Fortinbras)