Posted on July 8, 2013 by emmasrandomthoughts

Andy Murray, of all members of the big four, is the one who has always been most similar to Hamlet.  Both men were haunted by ghosts.  Hamlet was haunted by the ghost of Hamlet, Andy Murray was haunted by the ghost of Fred Perry, the last British man to win Wimbledon.  Both men are prone to melancholy and self doubt, as well as punishing themselves verbally.  Indeed, there was a time when Andy Murray could be seen on the tennis court, and it would be easy to imagine that he was calling himself pigeon livered.  Hamlet is prone to self-sabotage, as when he neglects to kill Claudius while he is praying.  Andy Murray has also been prone to self-sabotage on the court, by letting his frustration and negativity get the better of him.

I am delighted to say that yesterday, all that changed. 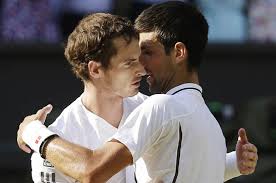 Andy Murray defeated the world number 1, Novak Djokovic in straight sets(!) 6-4, 7-5, 6-4.  The match was much closer than even that score suggests, and the last game was truly nerve-wracking.  During the first set, I texted a friend, saying “Andy Murray is trying to kill me.”

In fairness, it has to be said that Nole did not play his best tennis, but then again, neither did Andy.  What impressed me so much this time was Andy’s mental toughness.  The old Andy would have become discouraged in the first set when he was broken shortly after he broke Nole’s serve.   Not this Andy.  He was able to break back win the set.  Unbelievable.  I must admit, I didn’t know if this was possible for him.  When Ivan Lendl became his coach, I gave it six months.  Nearly two years later, he’s still his coach, and Murry is the reigning Wimbledon (and US Open) champion.  🙂

It is fair to say that Andy Murray has done more than win Wimbledon, beat the world number 1, and exorcise the ghost of Fred Perry from Center court.

Andy has banished his inner Hamlet. 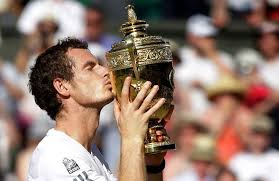