Posted on July 14, 2013 by emmasrandomthoughts

Here are my thoughts on Sir Lawrence Olivier’s Hamlet.

1 We must begin with this.

2 Needless to say, this production is very much indebted to the realist movement.  It attempts to create period costumes for the movie, and the Castle of Elsinore also looks like a castle from centuries ago.  Or at least, it looks like what we would expect a castle to look like from this time period.  Is it accurate?  No idea.

3  In addition, this film could not have been made before Sigmund Freud.  At the beginning and end of the movie, we see an image of the king and queen’s bed, driving home Freud’s theory that Hamlet cannot kill his uncle because Claudius has fulfilled Hamlet’s Oedipal desires.  (Claudius kills Hamlet’s father and marries Hamlet’s mother.)  It also draws on John Barrymore’s production of Hamlet which (apparently) was the first to stage the scene between Hamlet and his mother in the bedroom. (I have thoughts about that.)  Sir Laurence Olivier also kisses his mother on the lips several times to drive home the strangeness of their relationship. 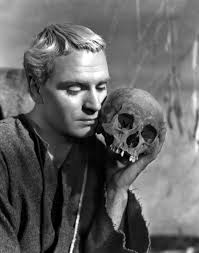 4 To some extent, the attempt to use period costumes annoyed me.  It annoyed me because I realized that people are going to watch this film and say, “This film is a faithful production of Hamlet,” when it takes tremendous liberties with the text.  First of all, a tremendous amount of the play is cut.  Characters such as Fortinbras, Rosencrantz, and Guildendstern never appear or are even mentioned.  These characters’ lines are instead given to Horatio.  Moreover, Olivier shuffles the order of several scenes within the play.  For example, he jumps from Hamlet’s “Oh that this too too solid flesh would melt” soliloquy to go to the scene between Laertes, Ophelia, and Polonius.   He then goes back to his scene with Horatio when he hears about the ghost.  These changes don’t bother me, but what bothers me is that, because the film uses period costumes, people will assume that this is a faithful production of Hamlet.  In reality, it’s a far less faithful production of Hamlet than Kevin Kline’s version of Hamlet, which is filmed wearing modern dress.

6  The film was far more cinematic than I expected.  Olivier showed a willingness to experiment with many of the conventions of film in his production, including voice over.  It didn’t feel like a videotaped play.

7 He leaves out the “Oh what a rogue and peasant slave am I.”  Big mistake.  Terrible.

8 I love how Olivier films the “To be or not to be” speech.  He is sitting at the top of Elsinore, looking down at the rough waves of the sea.  It has a tremendous sense of danger, as though any minute Hamlet could plunge to his death.

9 Olivier has lots of shots of winding corridors and stairways.  I think this is supposed to symbolize Hamlet’s subconscious.

10 The film also implies that Gertrude commits suicide.  He shows her staring at the cup with a knowing look, and when she tells Hamlet that she is poisoned, she seems at peace with this reality, as though she expected it.  Quite a twist.  I like it!

11 He also kills Claudius in a more violent fashion.  More dramatic, but fitting for film.

12 I was disappointed in Ophelia’s madness and death.  It lacked pathos.

Second Bonus thought: Olivier calls Hamlet the tragedy of a man who could not make up his mind.  This is far too simple.