Posted on July 19, 2013 by emmasrandomthoughts 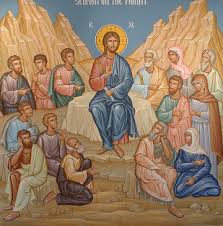 Harold Bloom epitomizes the response parodied by one of my instructors on the first day of class, “Come students, let us prostrate ourselves before the idol of Shakespeare.”  Another professor, who taught acting Shakespeare, would get frustrated at the way some of the students would approach Shakespeare.  I remember one student playing Romeo in the balcony scene.  It was torture.  For him, he was not so much playing Romeo as he was celebrating a Mass.  He had that sense of gravitas for the text.  So many students had that sense.  My instructor said, many times, “Shakespeare’s dead!”  It was like the scene in Dead Poet’s Society where Robin Williams tells his students that they should tear out a section of their textbook.  The students hesitate at first, then proceed with a kind of naughty gusto as Robin Williams urges them on.  “This isn’t the Bible!  You’re not going to go to Hell for this!”  I feel that someone needs to tell Harold Bloom that Hamlet is not the Bible, Hamlet the character is not Christ, and Shakespeare is not a god. 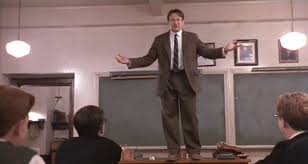 There were a few moments in the book that I enjoyed.  The first was learning about Orson Wells’ secret Hamlet fantasy.  In his fantasy, Hamlet does not return to Denmark from England.  Rather, he settles in England and changes his name to Sir John Falstaff.  And gets fat.

Even better though, was Harold Bloom’s theory that Shakespeare played the part of the lead player as well as the ghost.  I loved the image of Shakespeare giving the monologue about “the rugged Pyrrhus” “the mobled Queen” Hecuba with “tears in his eyes, distraction in his aspect, a broken voice, and his whole function suiting with forms to his conceit.”  But even more, I loved the idea of Shakespeare standing backstage after his part, listening to Hamlet’s “O what a rogue and peasant slave” soliloquy.

That soliloquy is truly thrilling.  There is so much action in the scene, and virtually all of it is in prose.  Polonius, Claudius, and Gertrude speak in verse, but as soon as Hamlet enters, the scene switches to prose.  Hamlet never speaks in verse in this scene.  Then, he dismisses the players, his friends, and then he is alone.  There is silence.  Then, Hamlet begins to speak in verse.  It is like the silence in a storm, then the low rumble of the train in the distance, signalling a tornado has touched down.

Yes, Harold Bloom, my Shakespeare and my Richard Burbage fist bump.  Deal with it.  🙂