Hamlet the Prince: Thoughts on the Royal Baby, the Lion King, and Hamlet

Posted on July 24, 2013 by emmasrandomthoughts

Ok, the royal baby has had his first photo op before his name.  Royals have different priorities than us mere mortals, I suppose.  Anyway, I wanted to talk about the royal baby (as well as the Lion King) and the fact that Hamlet is a prince, not just an average Joe.

I commented that one of the biggest mistakes in cutting Hamlet is cutting the character of Fortinbras.  There are a number of reasons why this is a mistake.  One of the main reasons is it reduces Hamlet to a domestic tragedy.  Americans love kitchen dramas, as my brother once called them.  We love seeing plays about dysfunctional families and their problems.  Hamlet certainly has these elements, but it is far more than that.

The world has once again been reminded of that, following the birth of HRH the Prince George Alexander Louis of Cambridge.  On the front page of the USA Today, they had a little graphic explaining to people where the baby fits in the line of succession.  It brought back memories of me at work last year, explaining to coworkers how succession works.  “So what happens to Harry when the baby’s born?”  “He moves down a slot.  Everyone moves down.”

Now, the monarch in Britain has no real power anymore, so it doesn’t really matter who is the heir to the throne.  But at the time that Hamlet was written, it did matter.  I remember the first time I read Hamlet in high school I was actually bothered by this.  Hamlet is the son of the king, but Hamlet does not become king.  Instead, his uncle becomes king, and no one at Elsinore cares!  I couldn’t get passed that.

It is strange, on the surface, that there is far more dynastic struggle in The Lion King than there is in Hamlet.  In The Lion King, Scar kills his brother to claim the throne.  Simba returns to the pride lands not so much to avenge his father’s death, but to reclaim what is rightfully his, and to fulfill his responsibilities as king.  It’s as though someone took the underlying dynastic issues from Hamlet and added talking lions.  There’s no such dynastic/succession angst in Hamlet.  Or is there?

I remember reading (unfortunately I can’t remember where) about the censorship rules of the Elizabethan stage.  There were things such as religious ceremonies that could not be portrayed onstage, avoiding the sticky Catholic/Protestant questions in a country that had swung from Catholic to Protestant to Catholic to Protestant at the whims of the monarch.  They also were not allowed to address any political issue of the day, and one of the biggest issues of Elizabethan reign was the succession.  Elizabeth had no children, and several claimants to the throne.  She always avoided the question of who would succeed her after her death, and the memories of previous wars of succession and coups must have lingered in the minds of her subjects.  It certainly would have been on the minds of people at the premiere of Hamlet.  Shakespeare is not allowed to mention the dynastic implications of Hamlet, but even if he could, would he even need to mention them?  The audience, I’m sure, would have seen a young man deprived of his right to be king and known instantly that something is rotten in the state of Denmark.

It’s worth pointing out that Shakespeare hints that the Denmark throne is not hereditary, but subject to election, presumably by powerful nobles.  In a way, this would be similar to the elections for Holy Roman Emperor.  This means that, by the beginning of the play, there has already been an incredible power struggle behind the scene.  Shakespeare does not stage any of this, so I am simply going to imagine what might have happened.

Before the play begins, the king, Old Hamlet is dead.  If there is an election of kings in Shakespeare’s Denmark, then shortly after the king’s death Elsinore would most likely have resembled a Vatican conclave.  Nobles would have been scurrying about, building and breaking alliances, arguing about who should be the next king.  Hamlet and Claudius would be the two most likely candidates, but Hamlet would presumably be handicapped, being away at school.  If he did not come back to Elsinore in time, he would have been depending on Claudius and Gertrude to make his case for him.  But Claudius has already betrayed Old Hamlet, and proceeds to betray young Hamlet by promoting his own case. 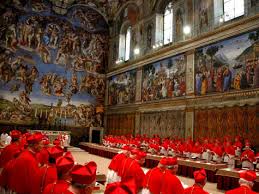 And where is Gertrude in all of this?

It was perfectly legitimate in the middle ages for women to exercise power on behalf of their sons and to lobby for their sons’ rights to power.  There are several examples of this in medieval history.  (Louis IX of France’s mother comes to mind.)  In this case though, Gertrude is conflicted.  She has already fallen in love with Claudius.  She cannot argue her son’s case against Claudius’ case.  Does she stay silent?  (A deafening silence, no doubt.)  Does she actively campaign, however subtlety, on Claudius’ behalf, against her son?

If Gertrude has worked against Hamlet’s election to the throne, then Gertrude’s betrayal is a betrayal of the highest order.  I cannot imagine why any woman would betray her son like that.  Shakespeare gives us no clue.  That being said, it would also explain the rage that Hamlet feels towards his mother.  She would have betrayed both Hamlets, old and young, by working for Claudius’ advancement.

In a way, I am starting to wonder about staging the confrontation scene between Hamlet and his mother in the bedroom.  It was first done by John Barrymore, who wanted to emphasize that Hamlet was mother fixated.  It is true, that Hamlet is strangely preoccupied with his mother’s sexuality in this scene. There is no getting around that fact.

But it is not simply a matter of her sexual preferences.  Hamlet’s house is a royal house, and his mother’s choice in husbands and partners had national consequences.  Indeed, it will bring ruin to her family and result in a loss of Denmark’s national sovereignty by the end of the play.