Posted on August 8, 2013 by emmasrandomthoughts

I’ve decided to combine my thoughts about these two versions of Hamlet.  They are very similar, and yet, in a way, they could not be more different.

1 I was fortunate enough to see this when a friend, who knows of my Summer of Hamlet, stumbled upon this and recorded it for me.  Unfortunately, I missed the opening scene with the ghost, but I saw everything else.

2 The actor who played Hamlet had a fascinating take on him.  He was incredibly understated in his performances.

3 What impressed me so much was the intelligence that he brought to the role!  I really got a sense of Hamlet’s intelligence and his unbelievable ability to read others.  His Hamlet was a thinker. Bravo! 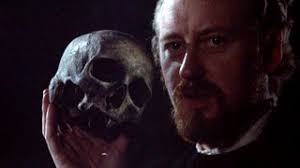 4 The film makes too much of the relationship between Laertes and Ophelia.  They’re practically making out.  Creepy!

5 In the scene when Hamlet confronts the ghost, we never see the ghost.  We only see Hamlet’s reaction to his voice.  It’s possible that they wanted Hamlet to appear insane, I supposed, but I doubt it.  I think they may have found it scarier not to show the ghost.  After all, a year in the future Spielberg would shoot Jaws and put an entire generation off the beach without showing the shark for the first half of the movie.

6 Anthony Hopkins played Claudius.  Why do I get the feeling that after killing Old Hamlet, Claudius ate his liver with some farva beans and a nice Chianti?  (Slurp slurp slurp?)

7 Anthony Hopkins did well as Claudius with the exception of the “O my offense is rank” scene.  There was not a shred of remorse in his voice.

8 Tony Richardson made a huge mistake in the “O my offense is rank” scene.  He moved it to after the death of Polonius and Hamlet is exiled to England.  That means Hamlet wasn’t there to almost kill him.  The scene is still important (it lets the audience know that Claudius is a murderer).  But without Hamlet, it’s just exposition.  HUGE mistake.

9 Ophelia was disappointing.  She played the Mad Scene the same way she performed every other part of the play.  Not good.

9 The best thing about this version of Hamlet was the pacing.  This sounds stupid, but it’s not.  I assure you it’s not.  Pacing is everything in Shakespeare.  Most people wouldn’t say that, but it is true.  Shakespeare is verse, for the most part, which means that it’s like music.  It has a rhythm and a beat.  A good performance of Shakespeare will respect the beat.  It’s worth pointing out that good pacing does not mean speeding or rushing through it, though it’s much better to say a speech quickly than slowly.  It means performing with a sense of urgency, and letting the rhythm of the verse (and the prose as well) flow.  In The Best Exotic Marigold Hotel, Dame Judy Dench’s character describes India as a wave.  If you try to resist it, you’ll be knocked over.  It’s the same with Shakespeare.  Don’t fight it, just ride the wave.   Tony Richardson’s production did just that.  Bravo!

This is Nicol Williamson giving the “O that this too too solid flesh would melt” soliloquy.

In other words, I don’t know what that is.  I have no idea how that thing makes the mini explosions that power a car.

A director needs two types of knowledge about a play: the aesthetic and the practical.  It is not enough to know how beautiful and wonderful the play is.  The director must know how the play works.  After watching how Zefferelli staged Hamlet, I’m not sure that he really knows how Hamlet works.

2 He doesn’t begin the movie with the ghost.  WTF?!?!  The opening scene with the ghost is one of the best openings in theater.  It instantly grabs the audience’s attention.  This is important in theater.  The audience can’t put down the play the way a reader can put down a book.  Hamlet is a long play, with complex dialogue and subplots galore.  It is important to give the audience an immediate burst of adrenaline.  Second of all, it introduces the fact that, as I said in a previous post, Hamlet is a national tragedy, not just a personal one.  Even the guards are affected by the inner workings of Elsinore.

3 Instead, Zeffirelli begins the movie with the entombment of Old Hamlet.

4 The most unforgivable sin in this movie is that Horatio is almost nonexistent as a character.  He’s there, but he seems no different than Rosencrantz and Gildenstern.  That’s pretty much unforgivable, in my book.  As Harold Bloom accurately described, we are Horatio.  Horatio is us.  When the play first starts with the ghost (as it should!) we see Horatio.  It is Horatio that first informs us of the existence of Young Hamlet, and because we trust Horatio, we trust Hamlet.  Also, Horatio is Hamlet’s only friend and ally in Elsinore.  We can, and should(!) mistrust everything that Hamlet says to everyone in Elsinore, with one exception.   We must trust everything that Hamlet says to Horatio.  Hamlet will tell him the truth, even when he lies to his mother.

5 Helena Botham Carter and Glen Close were quite good as Ophelia and Gertrude, respectively.

6 I have only seen Hamlet one time in the theater.  It was a fair production, but the most disturbing part of it was not the death of vast numbers of characters.  It was the fact that Hamlet dry humped the stage.  My Hamlet does not, under any circumstances, dry hump the stage.  I thought there was no way that any production could top that awful moment.  But then, Mel Gibson’s Hamlet dry humped his mom.  Even typing this makes me so mad, I have to take a break.

I could write a long diatribe about why Hamlet should never dry hump his mother, but if you honestly don’t understand that, then you need to go read something else.  I’ll wait. 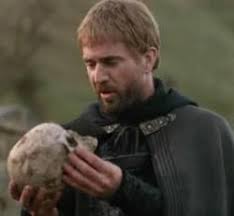 7 The movie lacks tension.  The best example is the scene where Hamlet meets Rosencrantz and Gildenstern for the first time.  In the play, this scene is pretty dangerous for Hamlet.  Just as communist countries recruited people to spy on neighbors, family and friends, R&G have been recruited to spy on Hamlet.  (There’s a reason Stalin stopped a production of Hamlet.)  Instead, they go out for a picnic.  The location is pretty, but it’s boring.  Ugg.

8 Mel Gibson was a serviceable Hamlet.  He hardly defines the role for me, but he was fine.

9 The director shows the deaths of R&G (I’m tired of writing their real names) but I think that was a good choice.  It’s easy to lose track of them.  Unless you’re Tom Stoppard.

10 Hamlet goofs off during the final fencing scene.  I think this was a mistake.  At this point, Hamlet has given up his pretense of madness.  Plus, Hamlet has been practicing fencing for a long time, so he has no reason to goof off.

11 The end of the film lacks all pathos.  Usually, Hamlet without Fortinbras is overly sentimental.  Instead, I didn’t feel the pathos of the last scene.  This is because there was no bond between Horatio and Hamlet in this film.

This is Mel Gibson’s “To be or not to be” soliloquy.

PS Paul Scoffield was great as the ghost.

This entry was posted in Uncategorized. Bookmark the permalink.