Why do superheroes need girlfriends?

Posted on December 17, 2013 by emmasrandomthoughts

I saw Thor 2: The Dark World a few weeks ago. Loki was amazing, of course, and Darcy was amusing. (Is it wrong that I want Thor 3 to be subtitled Loki and Darcy join forces and cause mischief and humor throughout the nine realms?) Thor was ok overall, better when he was with Loki. (Loki makes everything better.) However, by far the most disappointing aspect of the film was Jane Foster, played by Natalie Portman as a piece of cardboard. 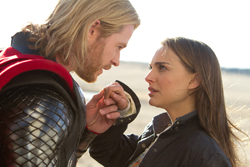 I can’t really criticize Natalie Portman entirely in the film, because I don’t think the script gave her anything with which to work. She is Someone To Rescue, this is most clearly demonstrated when Thor and Jane join forces with Loki. Shortly after they begin their escape, Jane passes out, and basically stays unconscious for the rest of the trip. What a copout. Yes, I know, she’s dying, but it would have been really interesting to see her deal with the fact that she was dying. Plus, Jane would have the opportunity to interact with Loki! (And Loki makes everything better.) Think about this for a second: as far as Jane is concerned, Loki is Osama Bin Laden, only probably worse. Imagine that you’re dying of a mysterious ailment, and the only person who can help you is Osama Bin Laden. I want to know what goes through the head of a person in that unenviable predicament. (Of course, this would require actual character development on the part of Jane, something that seems beyond the writers at this point.)

The failure of Jane reminded me of the weakest part of The Dark Knight trilogy: the women.

When I saw Batman Begins for the first time, I loved it. (Of course.) It was exactly what I had always wanted Batman to be: scary! And yet, I was deeply unsatisfied with the character of Rachael Dawes, Bruce Wayne’s love interest. First of all, her age made no sense. When Bruce comes back for the parole hearing for the man who murdered his parents, we discover that he has been kicked out of college. Rachel on the other hand, is an Assistant District Attorney for Gotham. This made no sense. I suppose that Bruce could have been an older college student, but it was more than that. Part of it is Katie Holmes in the role, she looks too young. She gives me the impression of a little girl walking around in her mother’s shoes.

Christopher Nolan also bears a large share of blame for this problem. I noticed that, in Batman Begins, the movie constantly had to remind you that Bruce is in love with Rachel. Constantly. A well written love story doesn’t need to tell the audience that two characters are in love. Worse still, they couldn’t even show the relationship in any kind of a real way. To me, the worst aspect of this is the scene when Batman Begins when Rachel sees Bruce for the first time since he left the country to go on his journey of self discovery. She stumbles upon him at a hotel, and her reaction is, “Oh, hey, it’s you again.” She thought he was dead! He was missing for seven years and legally declared dead! Plus, the last time she saw him, she slapped him and dressed him down. And her reaction is “Oh. It’s you.” Every time I see that film, I think to myself, “She needs to hug him.” If I saw a childhood friend for the first time in years, believed he was dead, and spent seven years living with guilt over the nasty things I said to him, I would hug him. And cry. I’m not alone in that, I’m sure.

It was when The Dark Knight came out and Maggie Gyllenhaal had replaced Katie Holmes that I realized that the weakness of Rachel was due to the writing and directing. Christopher Nolan simply does not know how to write romance. The Dark Knight Rises further proves this, as he bungles both relationships with Miranda Tate and Selina Kyle. If I could have given Christopher Nolan one piece of advice before writing The Dark Knight Trilogy, I would have told him, “The Superhero doesn’t need a girlfriend.”

This brings me to the question of this post: why does the superhero need a girlfriend? When I wrote my review of The Dark Knight Rises, I stated what I had thought for years growing up (and I still think is somewhat true): that superhero/action films put the girlfriend in the movie because they believe women won’t sit through a movie without romance in it. But I realize that this is not entirely the case. The main characters in the comic books all had girlfriends and love interests from the very genesis of comic books, and comic books were read, primarily by boys. It begs the question, to some extent, did the Superman comics have to have a Lois Lane?

I’m not opposed to superheroes having girlfriends. I just am troubled by the idea that The Girlfriend is kind of like The Costume or The Toys, etc. Frequently, she is simply an accessory. To combat this, I have a request to every comic book writer or screenwriter adapting a comic book. Before you give the superhero a girlfriend, ask yourself, “Why does the superhero need a girlfriend?”

1 Response to Why do superheroes need girlfriends?