Posted on October 25, 2014 by emmasrandomthoughts

1 Les Diaboliques
Les Diaboliques is a French thriller made in 1955. It tells the story of a married woman whose husband is cheating on her. She teams up with her husband’s mistress to kill him. They kill him, dispose of the body, and then bizarre, scary things start to happen.

Hitchcock actually wanted to direct this film, but the French director Henri-Georges Clouzot managed to secure the rights to the film. Much like Psycho five years later, the audience is urged to keep the ending a secret, with a title card saying “Don’t be devils!” 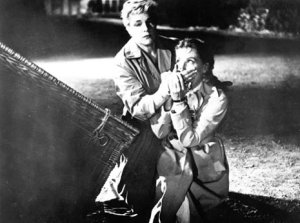 Another fascinating aspect of the film happened at the beginning. When the film began, it quotes the French censorship code, which stated that a film could morally show people committing crimes and heinous acts, BUT it also has to show people getting punished for these acts. This code is the reason why Hitchcock had to create another ending for Vertigo when it was shown in France. It is a simple scene showing two people listening to the radio, which describes the arrest of a murderer. It’s a terrible scene that undercuts the power of Vertigo’s iconic ending, but that was what the French censors demanded at the time.

Erin Brockovich is a Stephen Soderberg film about a single mother who takes on a power plant in California. It stars Julia Roberts, in the movie for which she won Best Actress. It also stars Albert Finny, who is simply wonderful opposite of Julia. The film is a bit of a hybrid between comedy and drama; it’s very much a dramatic film but it does have some wonderful comedic moments, usually in the interaction between Albert Finny and Julia Roberts.

It also explores a common theme in Hollywood, the woman who devotes herself to a cause and the resulting stress in her relationship. (Are there any films where men devote themselves to their jobs to such a degree that they destroy their relationships? I’m serious. Why is it that men are allowed to sacrifice their family for the sake of a job or a noble cause, and wives are never allowed to complain?) There is a wonderful scene where Julia Roberts listens to her boyfriend describe her daughter’s first word, and Julia Roberts wonderfully captures the joy and pain of the moment.

I think this might be my favorite romantic movie.

The Painted Veil is a movie based on the book by W Somerset Maugham about a woman who marries a man she does not love. They move to Shanghai, where she begins an affair with another British ex patriot. When her husband discovers the affair, he coerces her to joining him in a remote region of China, where there is a raging cholera epidemic.

The film is absolutely beautiful in its images of China. This is the third version of The Painted Veil made since the book’s publication in 1925, and the makers wanted to bring a sense of China to this film; they felt the original films were insufficiently Chinese. The landscape is lush and gorgeous; it makes me want to travel to the more remote areas of China. It also has exceptional performances from both Naomi Watts and Edward Norton as the couple whose marriage is, for all intents and purposes, practically dead.