Posted on December 21, 2014 by emmasrandomthoughts

I stumbled upon a protest in Cleveland, demanding justice for Tamir Rice, a twelve year old boy who was shot by a Cleveland police officer. Tamir was black, and he was carrying a toy gun.

1 I am not sure if I was supposed to be at the protest. As soon as I got to Playhouse Square, there were two police officers on horseback. However, they clearly saw me, and they did nothing to stop me.

2 I was not sure if they were trying to block the streets at first, and since the cops had already blocked the street, that would have been redundant.

3 When I approached, I realized they were staging a “die in,” people were lying on the ground pretending to be dead. 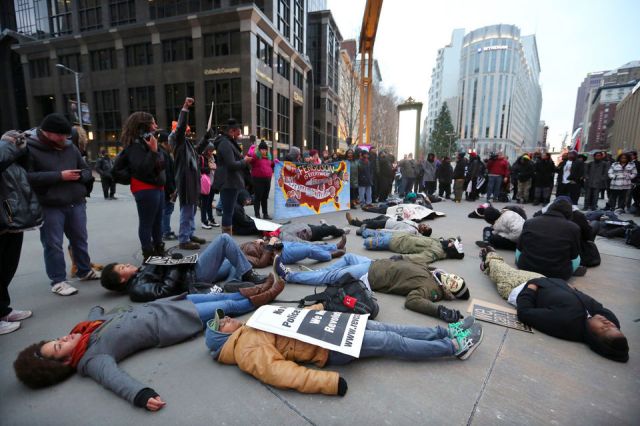 4 At first, I was afraid. I was afraid of both the cops and the protesters equally, afraid that they would do something stupid. I had attended a protest before, in college (of course) but this was different. They were protesting injustice by the police, and yet the police had to be present.

5 The protesters were a very diverse group. It was not solely blacks, yet blacks were very much present and leading the chants. One of the protesters carried the Pan-African flag.

6 I think often we feel that there is a hard dividing line between the Civil Rights protests and more recent protests. But seeing the the tiny protest today (there were no more than 50 people) I don’t think that is the case.

7 Protests today owe much to protests during the Vietnam War era. It is unrealistic to expect protests about issue of race and civil rights not to be influenced by those developments.

8 Non-violent protests and civil disobedience do not “just happen.” The protesters in the Civil Rights era actually went through training to prepare them to react non-violently to abuse. There was a large infrastructure supporting those movements, infrastructure that does not exist today (to my knowledge.)

9 Plus, modern day Civil Rights protests are victims of their own success. Civil Rights protesters could count on media protests due to the overwhelming violence with which the Southern police responded to the peaceful protesters. The violence guaranteed them coverage on the national news. (If it bleeds, it leads.) Local leaders today do not respond to peaceful protests with such extreme measure, (whether for moral or prudential reasons is irrelevant) so their protests tend to be buried in the papers. (I checked the Cleveland Plain Dealer’s website, and it is featured as a weekend pick with the headline, “Day of Protests Over Tamir Rice Shootings Ends After 10 Hours With No Arrests.” No one will remember this by Monday morning.)

11 At one point, after the die in, the protesters had a group hug (I’m serious) and chanted “One Human Family.” The idealism of the Civil Rights movement is still with us today.

I obtained the pictures of the Cleveland Plain Dealer website. Read their article here.