Posted on January 18, 2015 by emmasrandomthoughts

1 Book Thief
It seems a general rule that films about the War must be about women. The Book Thief is no exception. The story follows the experience of an orphan girl living in Germany during the Second World War. Her step family hide a Jewish man in their basement and she reads to him. 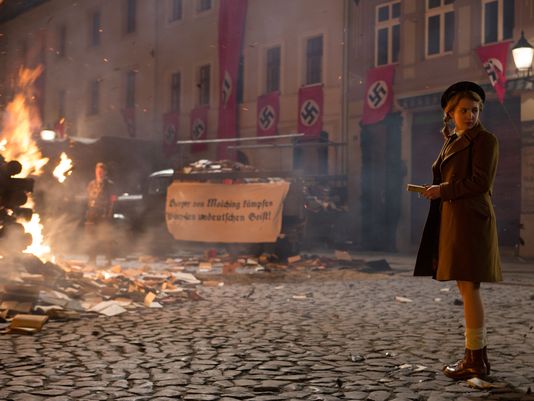 The film, curiously enough, is narrated by death, just as it is in the book (which I have not read.) It is an appropriate choice, since death can serve as an omniscient narrator and death was certainly everywhere in the war. There is a famous poem in German, called the Death Fugue, which states “Death is a master from Germany.” Perhaps the writer is drawing on that tradition. I was curious to see how that choice would work in the film, but I am happy to say that it works very well. The film is also prudent in how it uses the voice over narration.

The actress who plays the young girl is also very good. There is one scene in particular that was especially heartbreaking. I did not see it coming at all, and it was utterly shocking. The girl acquitted herself very well in that scene. The little boy, Rudy, was also pleasant as well, and Emily Watson and Geoffrey Rush round out the adults.

I reviewed this film on my blog before, so I will link to that in this post.

This film tells the story of the Queen in the week of Princess Diana’s death. I’ve often felt that the Queen is a bit of a Rorschach test; the way we view the Queen tells us more about ourselves than it does about her.

All the performances in this film are pitch perfect and the film plays with the audience’s sympathies. Helen Mirren won the Oscar for Best Actress for this film. (Personally, I would have given it to Judy Dench, but I don’t fault the Academy for giving the Oscar to Helen.) I feel generally sympathetic to the Queen, but I do have to shake my head at times.

The film, to my mind, has a significance far beyond the Royal Family. The question is about shutting ourselves off from the wider society. The Internet paradoxically, makes it possible BOTH to experience thoughts and a world beyond our own borders, and at the same time to close us off from a wider array of ideas. As Google’s search algorithms become increasingly sophisticated, we are far less likely to accidentally stumble upon a website with an opposing view. In a sense, we are all in danger of becoming like the Queen, locked up in a digital Balmoral away from the ‘shift in values.’

The Queen also shows why Britain will not get rid of the monarchy, at least in my lifetime. (Don’t misunderstand me, I’m not saying that they should. That’s their choice.) When Princess Diana died, the people wanted to see the Queen. There’s a great moment when Tony Blair is speaking to the Queen’s private secretary. He promises to speak to the people and try to ease the public anger toward her, but is skeptical of the efficacy of such practice. “It’s not me they wish to see.” The day that people do not care whether or not they see the Queen is the day that the monarchy will end in Britain.

Wait Until Dark was the last film that Audrey Hepburn ever made. She did not intend it to be so at the time, but as fate would have it, it was. In this film, she plays a woman who is struggling to accept the fact that she is now blind. As she deals with her disability, she accidentally gains possession of a large amount of heroin hidden in a doll. As she struggles to fight off men who will stop at nothing to retrieve their drugs, she must learn to turn her disability into an asset.

Audrey Hepburn’s final performance in this thriller is a very memorable one. I always loved her and she perfectly captures the fear and helplessness of her character. There is also a little girl in the film, a neighbor. The bond between these two was very moving to me. At times it is tumultuous, but there is a profound sense of solidarity between the two.

I don’t want to spoil this film too much, because the last scene is very exciting and scary. I have only seen this film once, and it was easily more than ten years ago. Despite that, I still remember that scene, and Audrey Hepburn’s terrifying refrain, “Keep tapping, keep tapping.” I still think of this movie when I hear the sound of the refrigerator!