Posted on March 14, 2015 by emmasrandomthoughts

Fried Green Tomatoes is a story about the bonds between women. The story centers around four women; two young women in the beginning of the century, and two older women at the end of the century. Kathy Bates plays Evelyn, a middle aged Southern woman who is unhappy with herself and her life. She enrolls in self improvement classes to try to gain self confidence and bring the passion back into her marriage without success. One day, as she was visiting a nursing home, she meets Ninny, an elderly patient played by Jessica Tandy, who begins to tell her a murder story. Intrigued, she keeps coming back to hear more.

The story revolves around two young women in the early twentieth century, Ruth and Idgie.. They are good friends bonded together by a series of hardships and tragedies, from the death of a brother to an abusive marriage. Despite this, they form a powerful friendship (or is it love?) and run a successful restaurant. However, one day this bond is threatened when Ruth’s abusive husband goes missing and Idgie is charged with his murder.

This film has great performances from fine actresses, including Mary Louise Parker, Kathy Bates, and Jessica Tandy. It is certainly not without it’s problems, especially in it’s portrayal of its black characters. However, the film is a moving and heartwarming look at the bonds between women and the perils of aging.

Once again, we return to Alfred Hitchcock; this time to an early film; The Lady Vanishes. The Lady Vanishes tells the story of a young socialite named Iris, vacationing in a fictional European country. On the train ride home, she encounters an elderly governess named Miss Froy. When she awakens from a nap on the train, she discovers that Miss Froy has vanished and everyone denies seeing her.

The Lady Vanishes was Hitchcock’s first hit in America. He filmed it in his native England, where he had far fewer resources. (Shortly after this film’s release, he was lured to America, where he had far more money and far more toys.) Hitchcock appears at the end of this film in the crowd of people at the train station. Hitchcock’s tradition of appearing as an extra in his films was originally an act of necessity. In large crowd scenes, all members of the crew had to appear as extras in order to give a sense of the crowd. The film also serves as a commentary on the political situation in late 1930’s Europe. The English passengers try to stay out of the conflict, but are eventually drawn in to the fray. 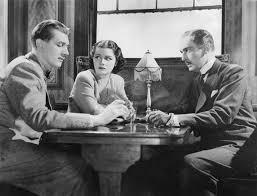 This is still one of Hitchcock’s earlier films and lacks the technical sophistication (and means) of his latter films. But despite that, the film shows Hitchcock’s consummate skills as a storyteller. The story is well structured and easily balances suspense and humor. He also populates the film with a wide variety of colorful characters.

Blue Jasmine is Woody Allen’s story of a woman brought low by her husband’s criminal behavior. Jasmine is a woman who was married to a rich and powerful man in New York. When is arrested and all of their money confiscated, she must move into her sister’s apartment and find a job. Shocked at her sudden fall from grace, she dreams of returning to the top and tries to separate herself from her past. As she schemes of returning to her former glory, she sinks lower and lower.

In many ways, Woody Allen crafts this movie as a modern day Streetcar Named Desire. Cate Blanchett is a modern day Blanche DuBois, moving in with her sister, whose boyfriend does resemble Stanley Kowwalski. She is shocked by the crassness of her sister’s lifestyle and disapproves of the men in her life. Jasmine tries desperately to hold on to her sense of identity in a place where she is “ashamed to be.” Like Blanche, Jasmine slowly loses her grip on reality and becomes increasingly desperate. The final scene of this film is so simple, but it has stayed with me very strongly during the past year.

Cate Blanchett returned to film in style in 2013. She had not made a film in a number of years; choosing instead to focus on theater in her native Australia. She and her husband served as co-CEO’s of the Sydney Theater Company. This film is enough of a reason to celebrate her return to the screen. Cate Blanchett brings both the subtle sense of class and superiority that she uses to carefully hide her instability. She is marvelous. This film also ties with Midnight in Paris as my favorite late Woody Allen movie.