Posted on April 25, 2015 by emmasrandomthoughts

It was in this film that I first discovered Cate Blanchett. It was love at first sight, and that love has never waned. Cate plays the young Virgin Queen as she rises to power. Long before she established herself as one of England’s most beloved monarch, Elizabeth was young and vulnerable. Cate Blanchett perfectly captures both her frailty and confusion as well as her growing sense of self possession and authority. The best example for this is a scene in which she rehearses her speech before Parliament to ask for the establishment of the Church of England. In her room, she paces and grunts and stumbles over words. Among the members of Parliament, she is witty and poised. 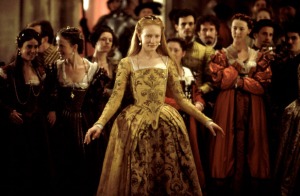 The film has tremendous cinematography and creates a tremendous sense of suspense. Everyone is plotting and spies are everywhere. It is difficult, if not impossible, to know who to trust. There are plenty of scenes of murder and torture in which civil blood makes civil hands unclean. One reviewer once said that Elizabeth I makes Elizabeth II’s “annus horribus” look like a slightly annoying case of indigestion. And of course, in the center, is Cate Blanchett.

This is one of those films that I am putting on the list even though I did not enjoy it very much. It Alien’s defense, I think the film suffers from, for lack of a better term, “The Hamlet problem.” I call it this because of a joke about a woman who sees Hamlet for the first time. When asked what she thought of it, she replies, “It was a terrible script. Just one cliche after another.” I felt as though I have seen Alien a number of times, and in a sense, I have. However, just like Hamlet, that is not Alien’s fault. If anything, that is a sign of how influential and powerful this film has been. 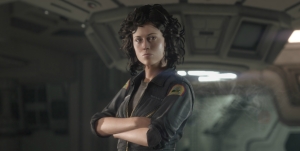 Plus, even though I have seen imitations of this film many times, there were still scenes that were genuinely scary. I am thinking specifically of one scene where one of the characters is in a crawl space and the Alien is approaching. The music, the lighting, the special effects are all perfect. I watched this film on my laptop and this scene was still completely chilling.

At long last, I feature Frozen on my blog. This film came out over a year ago and became a phenomenon. The story is loosely based on the Hans Christian Anderson story The Snow Queen. In this story, there are two princesses, Elsa and Anna. Elsa has magical powers to control snow and ice but an accident with her sister forces her to hide her powers from the rest of the world. When she is exposed, she flees her kingdom, which is plunged into a deep freeze in her wake.

I love that this film is ultimately about the love of sisters. I do not have a sister, but I can imagine the complicated, powerful bond that must exist between them. This film belies the idea that the only significant relationship for a woman is the relationship she has with a man (her husband.) I don’t deny the power and significance of the bond between a woman and her husband, but women exist in a wide web of relationships of varied significance. It’s great that this film chooses to celebrate one of those bonds.

Oh, and I know we’re all sick of this song, but I’m posting it anyway. I still like it.