Posted on May 25, 2017 by emmasrandomthoughts

I really didn’t think I was going to write about this topic again, but a few things happened.

1 The teaser trailer came out about a month ago.

2 The Last Jedi poster was also released to the public. 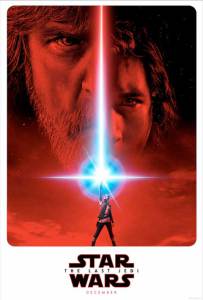 3 I noticed that, while I don’t get a lot of views, people are viewing the Reylo posts.  So, give the people what they want…

In this installment of Reylo thoughts, we discuss balance and unity in two famous philosophical and religious ideas and how Reylo both alludes to them and also subverts them.   You know, mindless entertainment.

The Last Jedi Trailer, when I first saw it, shocked me because it addresses an idea that Reylo supporters have discussed in detail before; the idea of balance in the Force.

A huge theme in Star Wars, and one which the filmmakers have said they are going to focus on in this new trilogy, is the need to balance the Force and the co-dependent yin/yang nature of its light and dark sides. A lot of people think the light side equals good and the dark side equals bad. But, while that has been the case in the specific characters we’ve usually met in the films, it’s actually far more complicated. In fact, instead of each side being purely good or evil,  good comes from the balance of both sides, and evil comes from leaning more toward one side than the other.

Star Wars Connection also touched on that idea as well.

Both of these analyses touch on the idea of yin and yang.

Yin and yang argues that opposite forces (light and dark, heat and cold) are not so much opposing as they are complementary and interdependent.  Yin and yang sees masculinity and femininity through this lens.  These states are not so much opposing or antagonistic; but rather they depend upon one another and complement one another.  Neither yin nor yang should dominate according to this understanding of the universe; rather they should work together and balance one another.

A person who commented on the Reylo posts said that Reylo would make Rey common.  While I disagree that a Virgin Rey would be groundbreaking in any way, I do think that Reylo would render Rey ‘common’, in a way.  However, here’s the kicker.  It also makes Kylo Ren common.

In yin and yang analysis, Kylo Ren and Rey represent the two sides of the Force, the dark side and the light.  The light side cannot defeat the dark, or vice versa.  The two sides must balance.  In this sense, any partnership between Kylo Ren and Rey, sexual or otherwise, is not about the two of them as individuals.  Rather, their partnership would serve as a representation of balance of the Force, and a vehicle for that balance.

In a way, it is similar to the traditional Christian understanding of marriage, in which the groom stands for Christ and the bride stands for the Church.  In a way, this is why the old Anglican marriage pronouncement declares “Dearly beloved, we are gathered here in the sight of God, and in the face of this congregation, to join this man and this woman in holy matrimony.”  The speech does not say “John” and “Jane”, in part because the bride and groom stand in for all men and women, for Adam and Eve, and Christ and the Church.

This is all very standard, but in a way, Reylo turns this symbolism on its head.

It does the same thing for Christ and the Church imagery.  In Christianity, humanity falls into sin and Christ rescues the Church and two two will be united in heaven.  However, Kylo Ren cannot stand for Christ, because he has fallen to the Dark side and needs redemption.  Some Reylo supporters believe that Rey will bring Kylo Ren back from the Dark side of the Force, which would make her the Christ figure in the story.

Now, will Disney actually go down this path?

I suppose it’s possible.  The trailer does hint strongly at the need for balance between the two sides of the Force.  Even Luke’s line at the end, “It’s time for the Jedi to end,” could signify the rise of Grey Jedi, Jedi who will use both the Light side and Dark side of the Force.

However, it is also not clear that Rey symbolizes the Light Side of the Force, in either the trailer or the poster.

In the trailer, we seem to see an image of Leia when we hear Rey’s voice over narration say, “Light,” implying that Leia signifies the Light side of the Force, not Rey.

This is even clearer in the movie poster.

In the movie poster, half of Luke and Kylo Ren’s faces are shown, bifurcated by the light saber.  In a sense, they represent the two sides of the person, a man split down the middle.   It would be tempting to say that Luke represents the Light Side of the Force.  But I am not so sure.  The image of Luke’s face is stern, large, and menacing.  Surprisingly, he looks more threatening than Kylo Ren.  Also, both he and Kylo Ren are bathed in red light, which has always signified the Dark Side of the Force.  The only blue stems from Rey’s light saber, which is shaped like Kylo Ren’s, and even that is still largely red. Kylo Ren is shown unmasked, angry, but not the frightening monster in the first film.  The poster is ambiguous about who is good and and who is evil in this trio, and suggests perhaps that Luke may not be as good as we believe.

(I would be fine with Luke turning evil, though I don’t think that the majority of Star Wars fans would agree.  If the death of Han Solo was painful for Star Wars fans, then the loss of Luke to the Dark side would be even greater.  That’s why I am fine with it.  Take chances, make mistakes, and get messy Disney!)

What I do think is likely based on the poster, is a blurring of good and evil, darkness and light.  I think that we will see shadows in Luke and Rey, and possibly some light in Kylo Ren.  That would absolutely be for the best.  I think that the poster, and the trailer suggests, that the The Last Jedi’s portrayal of Luke will throw everyone off balance.

I also don’t expect (or want) to see a romantic dynamic between Rey and Kylo Ren in this film.  Sexual dynamic?  Sure, why not?  But romance would be implausible and would not stem from the characters at this point.  For the 9th film?  Too early to say.

I will say it again, can we please get Rey a female friend?