Posted on June 19, 2017 by emmasrandomthoughts

The play actually writes its own induction, setting up the idea that the Taming of the Shrew is a play performed by a woman’s charity organization.  Most of the characters, including Petruchio, are played by women.

The Cleveland Shakespeare Festival is at its best when they are doing the comedies.  The histories and tragedies are good, but the comedies are fun.  Taming of the Shrew is no exception.  Katherine and Petruchio are portrayed broad enough to be hilarious, and real enough to temper the farce.  The play definitely goes for the angle that Petruchio does not love Katherine, but he does want to break her, and ultimately succeeds in doing so.  Despite the seriousness of this interpretation, the play never lost its sense of humor. 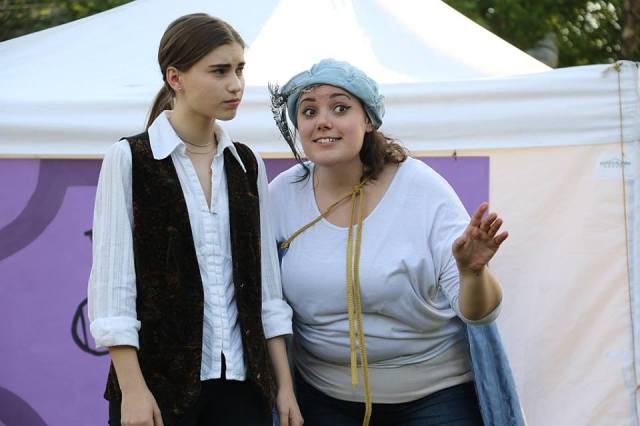 I think in some ways having a woman play Petruchio enables the production to go much farther with the domestic abuse angle.  If a man played Petruchio, and he clearly desired to break and subjugate Katherine in this way, the play would be not be funny.  An actress does not have that problem.  She can be forceful and manipulative and somewhat heartless, and still be funny.

The actress who plays Katherine also understand that Katherine needs to be broad, and somewhat unhinged.  When Petruchio and Katherine meet, she throws a large number of items and screams like a spoiled child.  Katherine is very much a spoiled child, and she must be portrayed that way.  She ties up her younger sister and drags her around the stage to torment her.  Her father ultimately failed to restrain her as a child, and now everyone pays the price.

The rest of the cast was also excellent.  When I reread Taming of the Shrew last year, I didn’t really care about Lucentio, Bianca, and the lovers who come to court her.  In this production, I really enjoyed these portions.  The actress who played Tranio was a load of fun.  Bianca also did a good job as the “perfect” daughter who slowly reveals a rebellious streak as the play continues.

The Taming of the Shrew was everything that I love about the Cleveland Shakespeare Festival.  Now, I feel as though summer has officially begun!

Up next, The Scottish Play.  Can’t wait!

This entry was posted in Uncategorized and tagged Cleveland, Cleveland Shakespeare Festival, Outdoor Theater, Shakespeare, Shakespeare in the Park, Taming of the Shrew, theater, Theater Review. Bookmark the permalink.